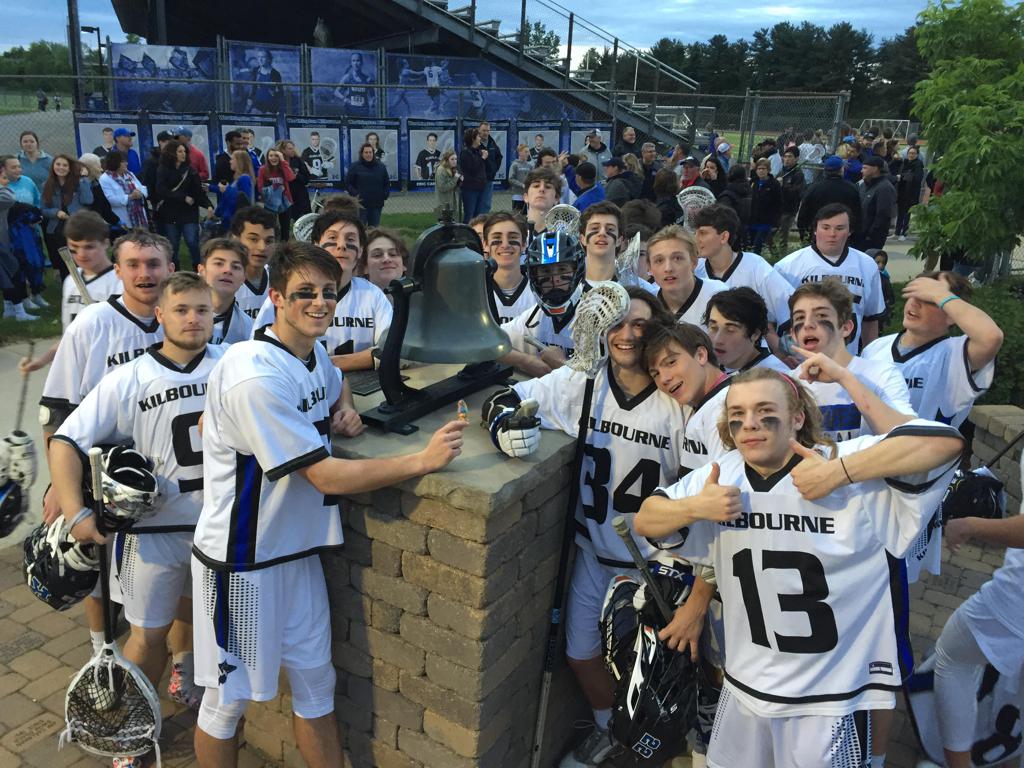 Wolves celebrate at the Victory Bell following 7-6 overtime win against Centerville Elks -- May 21, 2019

Worthington Kilbourne captured a dramatic, come from behind, win in overtime against the Centerville Elks Tuedsay night (5/21) in the OHSAA playoffs at WKHS Stadium.  The Wolves beat the Elks 7-6 in an overtime thriller.  Senior midfielder and captain Jack Ellis scored the overtime goal on a laser shot, while running down the alley, that tucked under the crossbar for the game winner!  The goal capped a frenzied comeback by the Wolves who trailed the Elks by 2 goals late in the 4th quarter.   The win now advances Kilbourne to the OHSAA Regional Final versus Upper Arlington Friday night.

Centerville played a strong game and won the possession battles most of the contest with good play at the faceoff X and long, extended offensive possessions.   The Elks took a 4-3 lead at halftime over the Wolves and credit to Centerville for a strong defensive performance .  Kilbourne actually out shot Centerville in the game but often missed the cage and the Elks cashed in on their shots efficiently.

After Kilbourne's Jake LeVette tied the game at 6-6 with 1:13 left in the 4th quarter, Centerville had a chance to win in the final 29 seconds of regulation on the "man-up" after a Wolves off sides penalty.  The Wolves defense stopped the Elks and then wisely held on to the ball as time expired in regulation meaning there would be no face off to start overtime.

The Wolves started with ball in overtime and managed a shot that was deflected.  The Wolves regained possession and were granted a timeout.  Following the timeout, Jack Ellis scored the winning goal before ever allowing Centerville  to get possession in OT.

The Wolves' win sets up a rematch against Upper Arlington Friday night at a neutral site.  Game time and location are still TBD.  The Wolves lost to Upper Arlington (8-10) earlier this season, but beat the Bears in the OHSAA Regional Final last year to advance to the Final Four.  So, the game is a rubber match from the last two contests between the perennial rivals--and winner advances to the Final Four this year.

Please plan on coming out to support the Wolves in the team's bid to make the Division I Final Four for back-to-back seasons.